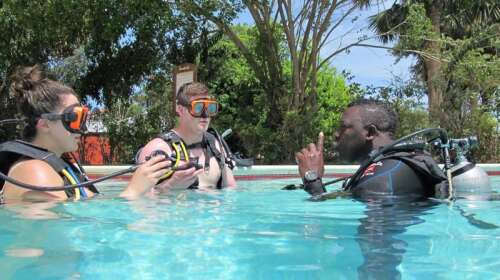 Nickardo Dennis shares a moment with guest divers after a morning dive.

WEDNESDAY was celebrated as World Oceans Day, but for veteran Sandals South Coast scuba instructor Nickardo Dennis, the day was no different as he celebrates the ocean 365 days a year.

Growing up in the seaside community of Belmont in Westmoreland, Dennis is a third-generation sailor.

“My grandfather and father were fishermen, so my brother and I always followed them out to sea on their fishing expeditions,” Dennis said. “But we actually learned to swim by sneaking around and going out to sea with our older cousins. We took advantage of every opportunity to jump into the water.

He said he always knew his life’s purpose was waiting somewhere out there in the ocean and he believed he could find the answer in the hospitality industry.

“I worked in Negril for almost a year until 2005 when I heard the new Sandals South Coast (then Sandals Whitehouse) was hiring,” Dennis said. He applied for a job as a lifeguard because working at Sandals South Coast would allow him to do what he loved but closer to home.

“Sandals South Coast is where my career really took off,” said the dive instructor. He said it was also the perfect training ground with his first watersports manager, Reginald Vickers, playing a major role in his career. “From the start, Mr. Vickers saw something in me that I didn’t even see in myself.”

“Back then, as lifeguards, we used to do swim training refreshes every month and swim competitions to determine the strongest swimmers. Growing up by the sea and swimming since I was six, I thought, clearly, I had this in the bag. That was until I struggled to keep up with my colleagues,” Dennis said.

He said the experience made him realize two things. He was playing at a different level and desperately needed practice. “Sandals have a lot to learn, but I had to be open to the process.”

Some people said that Dennis was lucky to have found his purpose and to do what he truly loves every day, but he reminded them that he never stopped preparing through training.

While working as a lifeguard, an opportunity arose for him to work in the field of activities. “In the activities, I was teaching guests about sailing, kayaking, windsurfing, etc. I was also starting to develop a real interest in boats,” Dennis said. After his working hours he hung out with the boat captains and learned to drive the boats and by the time he got his coxswain’s license he could drive all the boats in his department except the dive boat.

“The dive boat…it was the dream,” Dennis said. “Before I left the south coast, Clifford Kelly, a boat captain, was the one who taught me how to drive the dive boat. But there was a challenge at the time; the dive boat captain had to be at least a rescue diver,” Dennis said. He admitted that at that time he had no interest in diving. “When I did the open water training and the advanced dive training, it was only to be able to meet the requirements of one day being the captain of the dive boat.”

In 2008, he became a certified rescue diver, but his interest was always in driving the boats.

“Being on the dive boat as much as I did, I found myself interacting more with the divers. sharing their experience in the ‘blue room,'” Dennis said. “Soon I wanted to be a part of it.” He said that over time, he started to become a lot more comfortable with diving and that slowly but surely his passion for diving quickly replaced his love for boats.

“It’s funny sometimes how life has a way of redirecting you to your destiny,” Dennis reflected. He is very grateful to Keith Myrie, boat captain and dive instructor, who introduced him to diving, and to water sports manager Rowan Williams, who was instrumental in encouraging him to obtain a dive master certification. and diving instructor.

As a scuba instructor since 2012, Dennis has taught approximately 2,000 divers at various levels – from introductory course; discover scuba diving; PADI® Scuba Diver and Open Water certification for advanced diving certification; rescue diver and dive master courses. On average, Dennis, affectionately known as the “Scuba Genie”, sees around 20 divers per month. He is currently one of five dive instructors at Sandals South Coast and possibly the first PADI® certified dive instructor in the Whitehouse, Westmoreland area.

After a decade of helping others explore the beauty of the ocean, Dennis can truly call it his goal. “I feel immense joy going out to sea with my guests every day and watching struggling students grow into fully-fledged certified divers.”

“I consider the ocean my second home. I love it dearly and all the marine life and ecosystems that thrive within its walls and it hurts my heart to see it suffer,” Dennis said.

Meanwhile, he said irresponsible fishing practices and trash disposal had helped destroy the reefs. “The ocean is not what it was when I was a kid growing up in a community that depended on the ocean for my livelihood,” he said.

But he believes there is hope. He said the creation of the Whitehouse Marine Sanctuary by the Sandals Foundation and the installation of a team of marine rangers to patrol the beach has definitely led to an increase in fish biomass in the area. “We see the difference during our dives and it’s a good feeling.”

“People don’t necessarily understand the amount of work that goes into doing what we do professionally. It takes a tremendous amount of discipline and dedication,” Dennis said. “Sometimes I look back on my life and am amazed at how far I’ve come. I’ve had setbacks along the way, but I’m not focusing on those.

Dennis carefully explores the reef during a dive.

How this training aid helped me improve my putting fundamentals