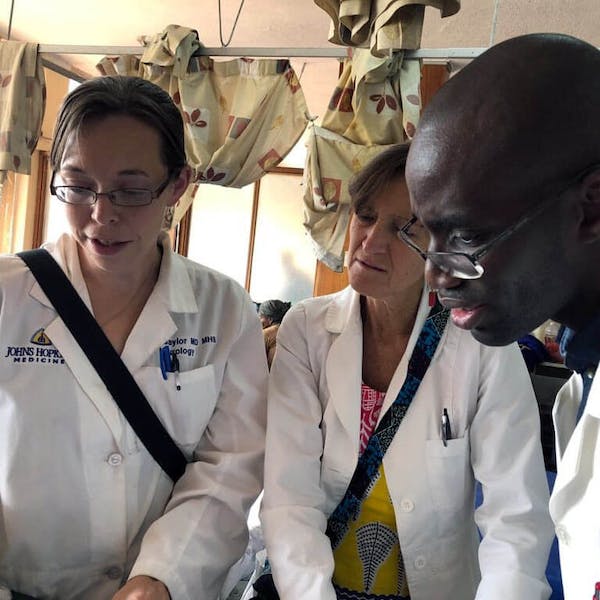 Dr. Deanna Saylor, a specialist from the School of Medicine in Neuro-infectious Diseases and Neuroimmunology, gave a presentation on establishing inpatient services and training programs in Zambia on September 8.

Saylor stressed that it is important to consider that this burden is not evenly distributed.

Further exacerbating this disparity, the neurological burden of disease is expected to increase exponentially over the next decade, and more so in low- and middle-income countries. Additionally, Saylor explained that there are very few neurological training programs in places like sub-Saharan Africa. As a result, there is no significant increase in the number of neurologists per population.

In 2018, Saylor joined the University Hospital (UTH) in Lusaka, Zambia. It is a large hospital, with 1,655 beds compared to 1,162 at Hopkins Hospital. It is Zambia’s main teaching hospital and Zambia’s national referral hospital. However, by the time Saylor joined the hospital, the hospital did not have a designated neurology unit and all neurological cases were being treated in the internal medicine department.

While at UTH, Saylor met Dr. Aparna Nutakki, then a fourth-year medical student at Rush University in Chicago, who spent a year and a half working with Saylor in the Neurological Patient Registry. hospitalized. There, they conducted a comprehensive clinical registry, carried out over six months.

In the clinical study, they found that their department had recorded 749 admissions, or about 125 admissions per month, and that 43% of their admissions were stroke cases. They also found that patients admitted to hospital were generally near the end of stroke.

While in 2018, the UTH did not have a designated neurology unit, it had all the basic tools needed to care for patients, including computed tomography (CT), magnetic resonance imaging (MRI). , electroencephalography (EEG), electromyography (EMG) and lumbar punctures. Since 2018, Saylor has spent his time building a neurology training in Zambia.

At UTH, Saylor managed eight wards and took responsibility for training new residents. She designed her own program from scratch without any preconceived notions. His hope was to blend traditional Zambian training with training that is more prevalent in the United States.

As Saylor describes, didactic training in Zambia is generally heavily protected. However, in the United States, she found that her didactic training was often interrupted and unprotected. On the other hand, the American medical program places more emphasis on clinical care.

In addition to providing training, Saylor also hoped to create an academic and research focus within his program.

â€œI wanted our residents to have the resources to develop their own locally relevant data that would inform how they care for patients, their policies and advocacy with the Department of Health andâ€¦ enable [them] to develop an evidence-based care system, â€she said.

Saylor’s proudest moment in his career was when the first group of interns graduated a year ago. She aspires to become obsolete by training other people to take over the program and lean on themselves locally.

Although Saylor has accomplished a lot since 2018, she still has many future aspirations, including the development of teleneurology services, a developing tele-EEG service in provincial hospitals, and the development of a suitable stroke center. in low-resource settings.

Elneny returns to training earlier than expected after hamstring injury

Regulation and supervision in the dog training industry?