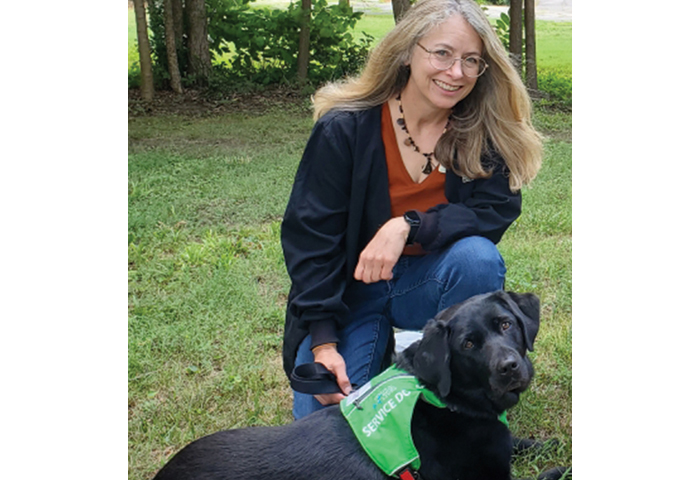 A local pediatrician writes a song in honor of service dogs

SALISBURY — A local pediatrician who uses a hearing assistance dog has taken a creative approach to sharing the importance of assistance dogs just in time for National Assistance Dog Month.

Dr. Danielle Rose of Salisbury Pediatric Associates wrote the lyrics to “The Service Dog Song” after living with her third service dog, Delight. The song has been a side project for two years.

Collaborating with band Nova Pangea, the two were able to bring his lyrics to life through the combination of the band’s lineup and Dr. Rose’s melody.

“It’s so exciting to have the experience to share,” the doctor said. “She (Delight) helps me communicate better than I could without her.”

Rose also wrote a middle-level book on what happens to dogs when they go to military school — with a twist. The story is told through the eyes of the animals, exploring what they would talk about with their classmates and what it means to each of them to be a service dog.

The story was inspired by his first service dog, Chucky, a Terrier cross breed who had a lot of behavioral work to do before receiving his certification. Her friend also had a dog of the same breed named Bogart, who played and “cut” with Rose’s assistant. This led her to wonder what goes on in the minds of animals during their training and how do they communicate about assistance.

After Chucky, Rose met Ginger, who was a black lab like her current dog, Delight. Ginger was her accompanying service dog when she was hired at Salisbury Pediatrics and, according to the doctor, the employees welcomed Rose and Ginger with open arms. Ginger sadly passed away from cancer, which prompted Rose to meet her current service dog when Delight was two years old.

While pondering the idea for her book, Rose became curious about what it means to be a service dog for Delight, now seven years old.

“The Service Dog Song” features words of comfort from a service animal to its owner. The lyrics read, “Calm your fears, I’ll be your ears.” Dry your tears, I will be near you and I will always be your ears.

The song debuted at the Together in Harmony festival in Dallas, Texas on July 16 with nonprofit Dogs for Better Lives in attendance. The event was the first inclusive arts festival for the local deaf and hard of hearing community. Rose and Delight were there and provided a brief introduction and demonstration as the minds behind the song. Rose is also Chair of the Board of DBL.

“When we were asked to collaborate with Dr. Rose to compose the music for his service dog song, we thought we could honor the legacy of our recently deceased dog, Gigi, who always loved to hear us play. music,” said Uriel Vásquez and Carmina. Murillo of New Pangea. “This opportunity has come to heal that void in our hearts. We finally had the opportunity to work on a project that involves our two passions: music and the love of dogs. We would like to thank Dr. Rose, Delight and the entire Dogs for Better Lives team for this delightful experience.

Rose has always had a love for music in addition to her passion for her medical practice with children. Growing up, she learned to play the piano and cello despite her progressive hearing loss, discovered at age five during a kindergarten hearing screening. Her mother was told at this time that the gravity was mild but would progress as she got older. Rose was told afterward to focus on building up her lip-reading ability.

However, as she continued through middle school and high school, she began to lose more hearing in both of her ears, which led to her having moderately severe hearing loss upon graduation. She wanted to play in her school band, but with her condition, she was told that brass could potentially make her hearing loss worse.

“I liked the usual pop music of the era, that was quite a while back in the 70s,” she said. “But I learned the classical cello while I was in school because it was easier on my ears.”

By the time she graduated from high school, she had acquired her first set of hearing aids which helped her improve her music listening skills. As she continued through college, her sense of hearing continued to decline until, during her second year of medical residency in 1992, she lost all hearing from a ear.

She started learning sign language to help communicate, but also said she wasn’t able to appreciate music like she had before, had trouble understanding lyrics and that his busy schedule in medical school left him much less time to focus on music.

For eight years in medical school and residency, Rose struggled to maintain her love of music, now having lost all hearing in both ears. In her senior year, she received her first set of cochlear implants, opening her world to a reappreciation of music that she had missed so much. It was also the help she needed to pass her listening test in 1994 before becoming a practicing physician.

In 2010, she received her second set of cochlear implants. That’s when she was able to start listening to more complex songs featuring a variety of instruments in different genres, from jazz to the 70s pop hits she enjoyed in high school. Rose also shared that Spotify has been a great resource for her over the past three years because she can keep up with the lyrics provided on the app and because of the large number of songs in her library.

“The Service Dog Song” can be found at Youtube and Facebook on the official pages of Nova Pangea.