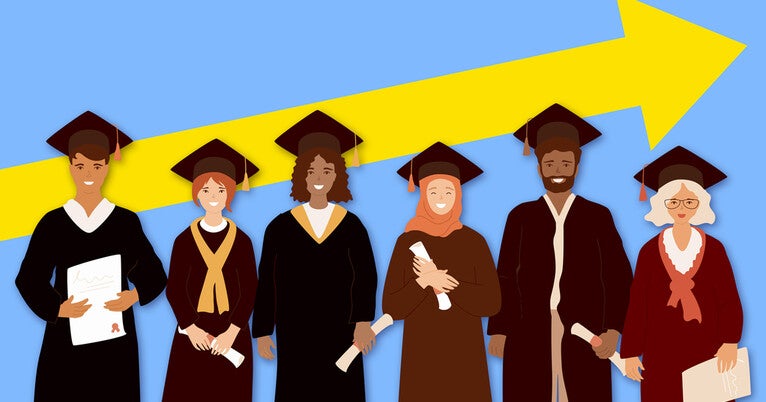 MD-Ph.D. programs have increased diversity – but there is still work to be done

Physician scientists with both medical degrees and doctorates are major contributors to the biomedical workforce. While they make up just 4% of medical school graduates in the United States, they receive about half of all National Institutes of Health (NIH) research funding given to physicians.

However, the MD-Ph.D. the population has always lacked gender and racial/ethnic diversity. So in 2009, funding bodies began tying financial support to diversity efforts. In a recent study, Yale researchers examined whether these changes had an impact. According to their findings, recently published in the journal Academic Medicine, MD-Ph.D. the programs have diversified, but there is still room for improvement.

Dowin Boatright, assistant professor of emergency medicine and lead author of the study, and Angela Martinez-Strengel, who led the research as a postdoctoral fellow at Yale and is now a pediatrician at Randall Children’s Hospital in Portland, Oregon, s sat down with Yale News to talk about the progress that has been made and the gaps that remain.

This interview has been edited and condensed.

What led you to conduct this study?

Angela Martinez-Strengel: Around 2009, there were a lot of specific changes and regulations for medical schools and MD-Ph.D. diversity programs. For example, the Liaison Committee on Medical Education, which accredits medical schools, introduced a diversity accreditation standard requiring all schools to have policies and practices in place to recruit and retain a student body. diversified. Around the same time, the National Institute of General Medical Sciences, which is the group that funds about half of the MD-Ph.D. in the United States, have added specific funding rules requiring these programs to demonstrate a structured and concerted effort to educate diverse students. And a lot has happened during this time that we think could impact the demographics of MD-Ph.Ds. the programs look like.

Have there been any improvements?

Martinez-Strengel: Yes. We reviewed all MD-Ph.D. accredited programs in the United States. Overall, we have seen an increase in the percentage of women enrolled as well as the percentage of underrepresented racial and ethnic minorities.

Between 2009 and 2018, the percentage of women registered—we didn’t have access to self-identified gender, just gender—increased from 38% to 46%. For underrepresented minorities, we went from 9.8% student enrollment in 2009 to 16.7% in 2018. But the majority of that change was led by Latina/Hispanic, Black, and Native American populations. experiencing smaller increases, and no statistically significant increases in Native Hawaiian/Pacific Islander students unfortunately.

It seems that there is still work to be done.

Martinez-Strengel: There is certainly still work to be done because the demographics of MD-Ph.D. programs do not yet reflect the diversity of the United States population.

Dowin Boatright: And there are still about 22% of programs that have not any enrolled underrepresented students. So I think that even though we have made progress, there are many opportunities for growth.

Are there any strategies that could help bridge this gap?

Martinez-Strengel: We examined whether the programs were supported by funding from the NIH Medical Scientist Training Program (MSTP). NIH MSTP-funded schools account for about half of all MD-Ph.D. programs, and we found that gains in enrollment diversity were concentrated in NIH-funded MSTP programs.

Boatright: One of the hypotheses we made was that when NIH tied program funds to diversity standards, it created a very strong behavioral incentive for programs to achieve a certain level of diversity.

Martinez-Strengel: So it’s not just a mission on paper, but something that you actually have as a requirement that you must have to achieve very specific goals. Expanding funding for the MSTP could be a way to increase enrollment of underrepresented minorities. It seems important to have this financial incentive and this specific standard to meet. So looking for other ways to make programs accountable, either to the school or to other sources of funding, might be another way to do that.

Are you continuing this line of research?

Boatright: Yes, we conduct qualitative interviews with representatives of the programs that have been most successful in recruiting diverse candidates and try to identify the unique aspects of their organizational culture and the specific strategies that enabled them to succeed.