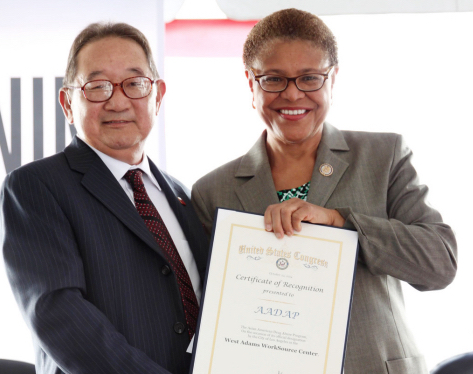 Watanabe’s 46-year career with AADAP began in 1975 as an addiction counselor whose clients entered a multi-month residential program at the agency’s treatment center. The program provided residents with a stable and supportive living environment, and it is a model of treatment that is still in effect today.

In 1982 Watanabe was promoted to his present position and led AADAP from a grassroots organization of 20 staff to a full service agency with over 120 staff at 10 service sites serving over 20,000 people. every year.

In addition to its residential treatment program, AADAP offers outpatient drug addiction programs for youth and adults, as well as drug prevention and education programs.

Over the years, AADAP has expanded its services to meet the needs of an underserved community, providing employment resources and skills training as well as programs involving gang intervention and HIV / AIDS awareness.

Born and raised in Hawaii, Watanabe moved to Los Angeles and attended high school in Venice. After graduation, he enlisted in the military and served in the Vietnam War as a helicopter crew chief.

Upon his return, Watanabe received an undergraduate degree from Cal State Northridge and a Masters of Social Work from UCLA.

He is the former chairman of the Asian Pacific Policy & Planning Council (A3PCON), a consortium of more than 40 community agencies based in Los Angeles County, and chaired its committee on drugs, alcohol and tobacco for 12 years.

He was a member of the Los Angeles County Narcotics and Dangerous Drugs Commission for 16 years and chaired the Asian and Pacific Islands Constituent Committee as an advisor to the California Department of Alcohol and Drug Programs. drug (DADP) for eight years.

He is a founding board member of the National Asian Pacific Families Against Substance Abuse (NAPAFASA), a national organization of Asia-Pacific alcohol and drug agencies. During these activities, he organized workshops, seminars, testimonies and consultations with local courts and national sites.

In 2017, Cal State Northridge and the Trustees of California State University awarded him an Honorary Doctorate of Human Letters (LHD) in recognition of his long-standing work in the social service field.

Dean Nakanishi, longtime Executive Director of AADAP, is the new President and CEO.

Watanabe will be honored for his long-standing commitment and work at the AADAP: Showtime 2021 Hybrid Fundraising Event on Saturday, October 9. Hula Dancers and includes an in-person VIP reception at Terasaki Budokan at 5 p.m. and a live broadcast of the virtual show at 7 p.m. To learn more, call (323) 293-6284 or visit: https://showtime2021.givesmart.com

Physical Activity Matters – Some Outdoor Sports You Must Try