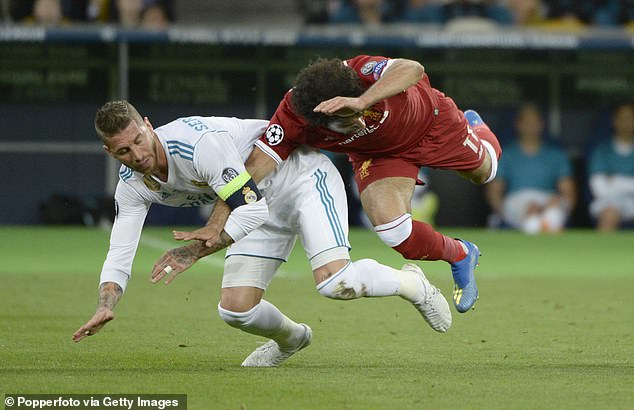 Jurgen Klopp thinks revenge is a wasted emotion. For the Liverpool manager, Saturday’s Champions League final against Real Madrid will stand alone as another very big game to win.

Footballers, however, are different. They are younger to begin with. They are less analytical and more emotional. So things like Real’s 2018 final defeat in Kyiv linger longer in the mind. Asked about it on Wednesday at the Liverpool training ground, Mohamed Salah did not hesitate.

“I remember when I left the pitch after 30 minutes of that game, it was the worst moment of my career,” Salah said. “I was really depressed. I had a good season, then playing my first Champions League final and leaving so quickly was the worst thing that could have happened to me.

“I found out about the result while I was in hospital. I thought we just couldn’t lose the game that way. I had never felt that before in football.

Salah was asked about another more recent disappointment in his life as a footballer, namely Egypt’s failure to qualify for the World Cup. The 29-year-old missed the decisive penalty as Egypt lost a qualifier to Sadio Mane’s Senegal. Interestingly, he swept that one. “I didn’t have time to think about it,” he said.

So the depth of Salah’s scars from 2018 is clear and unsurprising. Taken to the ground by Real defender Sergio Ramos, Salah couldn’t continue and missed the final hour of what turned out to be a disastrous 3-1 defeat in the Ukrainian capital.

He hasn’t had many disappointments with Liverpool since then. Sunday’s Premier League near-miss was a casual subject for Salah and his manager on Wednesday. Indeed, in his four and a half years at the club, Salah has won every trophy possible. It remains to be clarified how long he will remain.

Confirming that he will certainly be at Anfield for at least another season, there is no immediate need to panic.

Liverpool have a team that continues to evolve. Seeing Luis Diaz’s lean, coltish figure besieged by reporters in his native Colombia on Wednesday was bound to be a profound reminder of Liverpool’s modern strength. Just yards away, another striker, Mane, spoke to a TV crew rather cryptically about his own future.

On the one hand, all of this is acceptable and normal. Mane, for example, has been playing in England since joining Southampton eight years ago and is now 30. Salah reaches this historic anniversary next month. No one can be expected to stay forever when other glamorous opportunities are available.

And, on the other hand, it is becoming increasingly clear that Liverpool are a club that will be able to cope with the form of their squad which continues to change and transform over the next few years.

The only major contract that has been signed recently is Klopp’s – the manager will remain until at least 2026 – and it’s things like this that should send Liverpool optimistically to Paris on Friday.

“We are in talks with all the players, but now is just not the time to talk about everything,” Klopp said.

This will be the third Champions League final in Klopp’s time on Merseyside. That in itself is a remarkable thought.

The club also lost the Europa League final to Sevilla under the German’s watch in 2016. His side played well in the first half of that game, unevenly throughout against Real in 2018 and rather unremarkable by securing their redeeming Champions League triumph over Tottenham in 2019.

At the Stade de France on Saturday, it may be better. Carlo Ancelotti’s Real Madrid side are no classic version but have shown in this year’s competition that they can produce some remarkable moments.

Their late dramas against Manchester City in their semi-final second leg are some of the most incredible in the competition’s modern history. Having not managed a shot on target all evening, Real scored twice in added time to take the game into extra time and then won.

“If you just take the last 10 minutes of Real games you say they’re pretty much unbeatable and we don’t have a chance because the comebacks were really special,” Klopp said.

“But the games were all longer than 10 minutes. We can’t go into the game and talk about how they are in the last five, 10, two minutes. Thank goodness there are still 88 minutes until that.

Klopp has his own memories of what happened in Kyiv four years ago. The same goes for Liverpool goalkeeper that night, Loris Karius. Gareth Bale too, the author of the two goals for Real. Only the Liverpool manager and their star striker have the chance to write a different script this time.

“I don’t believe in revenge but I understand it,” Klopp said. “I’m not sure that’s the right thing to do. I understand what Mo is saying.

“He wants to fix things. I want to fix things. There is an opportunity to win it now and I think it will be a great story. But if we do, it won’t be because of what happened in 2018.’