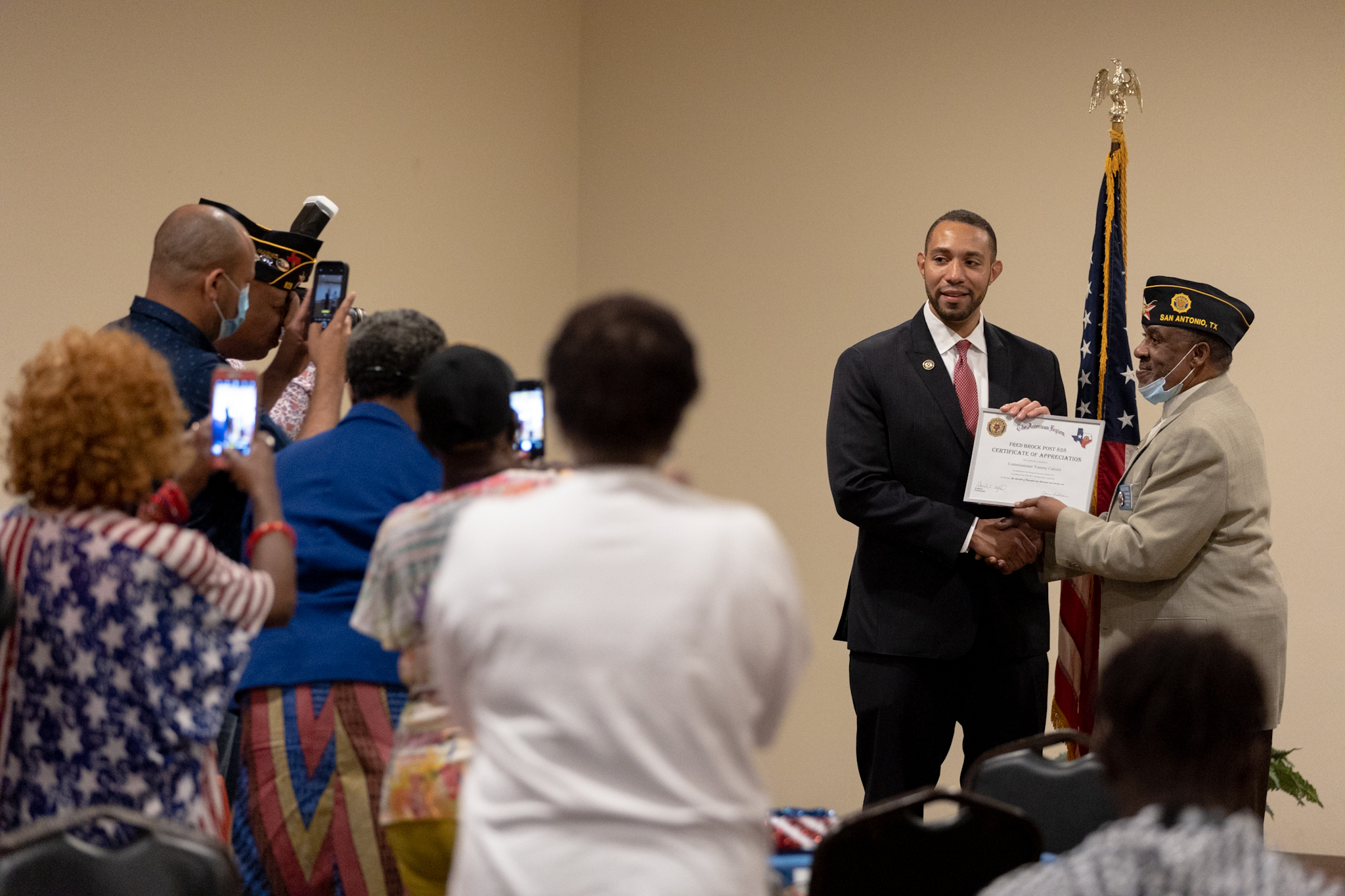 Bexar County officials will build a new memorial to commemorate the Buffalo Soldiers, black army regiments whose history is closely tied to that of San Antonio.

Bexar County Commissioner Tommy Calvert (Pct. 4) announced Thursday that Pletz County Park, 3726 Willowwood Blvd., on the East Side of San Antonio, was the location of a statue honoring the soldiers, who were instrumental in the American expansion to the West.

As part of the county’s 2022 budget, Calvert secured $ 400,000 for the statue, the location of which in a county park also opens it up to additional county funding, he said.

“The statue must promote postcolonial reconciliation, heal the wounds of genocide, and promote how the service of the Buffalo Soldiers expanded freedom, justice, the Constitution, American ideals, and working toward a more perfect union,” said Calvert at a Veterans Day event at American Legion Extension 828 Fred Brock.

The statue will honor the black soldiers, many of whom were once enslaved, who enlisted in the army’s five all-black infantry and cavalry units after the Civil War. For three months in 1867, the 9th Cavalry Regiment met in what is now San Pedro Springs Park, north of downtown San Antonio, where a marker commemorates the training ground.

Stationed in the Southern Plains, New Mexico, Arizona, and the Western Mountains, the Buffalo Soldiers fought against Native American tribes and opened the western border to American expansion. Some regiments later quelled a land dispute in 1892 in Johnson County, Wyoming, and fought in Cuba during the Spanish-American War.

Established in 1999, the Bexar County Buffalo Soldiers Association strives to preserve this history. On Thursday, the group hosted their annual Veterans Day celebration at the San Antonio National Cemetery. Members wore their blue and yellow uniforms and riding gloves in the style of the riders of the late 19th century.

“There’s nothing in the history books, so if we don’t go out and tell this story, who’s going to hear it?” Said Turner McGarity, one of the group members.

Details on the appearance of the statue and is still in the works. Calvert invited the American Legion Post and the Bexar County Buffalo Soldiers Association to nominate members to sit on a statue committee, adding that he also intends to invite local Indigenous groups to sit on the committee.

The location of the statue in Pletz County Park is not yet certain, but the park’s connection to Salado Creek has historical significance. On the banks of the same stream, 13 Buffalo Soldiers were executed after a trial for their involvement in a riot in houston August 23, 1917.

The violence was the result of tensions between Houston’s all-white police and the 24th All-Black Infantry Regiment, a regiment of Buffalo Soldiers sent to guard a military training camp construction site. According to the Texas Historical Association, police beat, shot and arrested several soldiers and officers before the riot broke out.

Police abuse led to a mutiny against white army officers and over 100 Buffalo Soldiers marched on Houston. They killed four Houston police officers and 11 white residents; 12 others were seriously injured. Four black soldiers were killed; two of them were shot dead by their own men.

The military held courts martial against accused members of the Fort Sam Houston regiment, finding 110 of them guilty. Only military officers and the Bexar County Sheriff were present when 13 soldiers were hanged on December 11, 1917, according to a news report.

Brig. General Shan K. Bagby, keynote speaker for the Buffalo Soldiers Association at his event Thursday, spoke about the history of racial oppression in the United States. But as the first black dentist to achieve his rank, he also noted the country’s ability to transcend its past.

“We live in a country and a society where our history is not necessarily our destiny,” Bagby said.