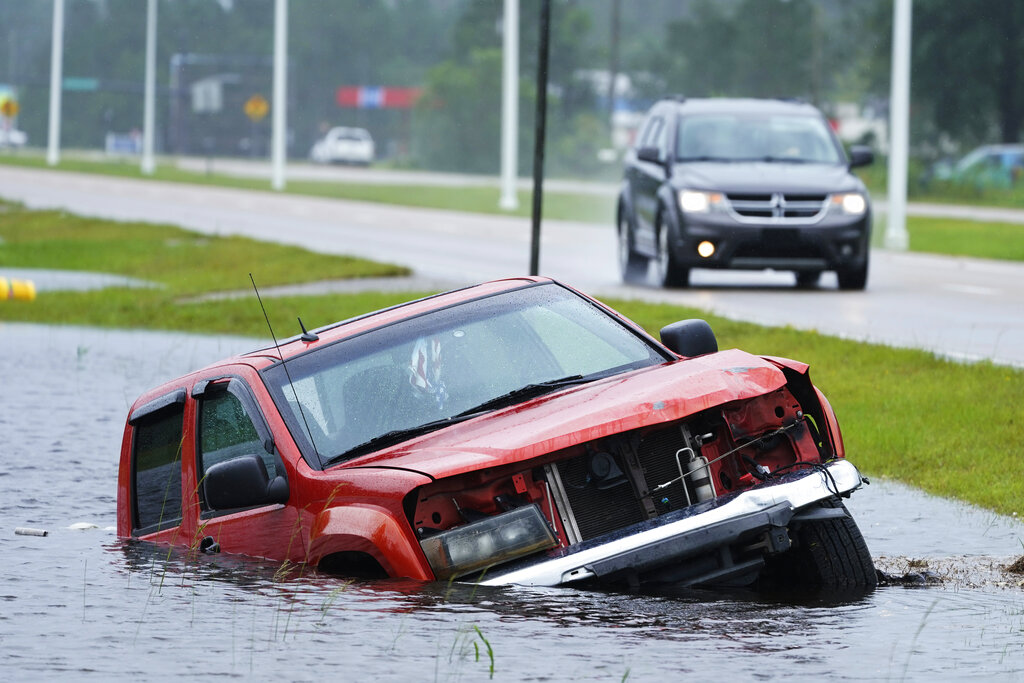 No money or gas to run from Ida: “We can’t afford to leave”

BATON ROUGE, Louisiana (AP) – Robert Owens felt defeated and helpless on Sunday as he waited in the Louisiana capital for one of the strongest hurricanes to ever hit the United States to make landfall.

The 27-year-old had spent days anxiously watching long lines of cars evacuate from Baton Rouge to safer places out of state as Hurricane Ida approached. He had hoped that he and his wife, his mother-in-law, his roommate and four pets would be among them. But leaving would have required money to buy gasoline and a hotel room, which they did not have.

In desperation, Owens went to ACE Cash Express on Saturday and submitted documents for a payday loan. He was turned down, told he didn’t have enough credit history.

On Sunday, it was clear they would weather the storm at home in his family’s duplex apartment.

“Our bank account is empty – we cannot afford to leave,” he said.

Owens said the majority of residents in his low-income neighborhood are in the same situation. They want to leave to protect families, but have no choice but to stay.

“A lot of us here in my neighborhood just have to squat and wait, not knowing how much it will get worse. It’s a terrifying feeling, ”he said.

“Over there, people who have funds to lean on can get out of here, but there are a lot of low-income people who don’t have a savings account to fall into,” he said. he continued. “We are being left behind.”

At 9 p.m. Sunday, Owens said his family and everyone else in his neighborhood had lost power. The sky was lighting up green because of transformers exploding all around them, he said.

Several trees had collapsed on neighboring properties, but it was too dark to see the full extent of the damage. Owens said they were trying to use a flashlight to watch the street, but were concerned about compromising their safety.

“Never in my life have I encountered something so major,” he said as giant gusts shook the windows of his house.

More than a million customers in Louisiana lost power overnight Sunday through Monday, according to PowerOutage.US, which tracks outages across the country.

Owens said there were a few times it looked like the roof of his duplex might come off. He said his wife was packing a bag of clothes and essentials, just in case.

“We will take shelter in the car if we lose the house,” he said. The family all share his wife’s Toyota Avalon, a vehicle “not large enough” to house four people, three dogs and a cat.

Earlier today, Owens said he was hastily placing towels under leaky windows in his duplex and charging electronics. He tried to go to Dollar General and Dollar Tree to get food, but they were closed. Her family has lights stuck around the walls of the house. They planned to hide in the laundry room or kitchen when the storm hit – places without windows.

“There is a general feeling of fear of not knowing what the consequences of this will be,” he said. “This is the most worrying thing. Like, what are we going to do if it gets really bad? Will we still be alive? Will a tree fall on us?

Owens said his stepmother was on disability. Her roommates both work for Apple iOS technical support. His wife works to plan blood donations. All of them depend on the Internet to work from home, and if it goes dark, they won’t be able to make any money.

“We could be out of work, and the rent, electricity, water, all those bills will still have to be paid,” he said. “We’re a little worried about losing our utilities or even our house – if it’s still standing – because we won’t have money for more bills.”

He said it was hard to feel so vulnerable, like his family was being left behind.

“The fact that we are not middle class or above, it kind of comes down to biting us over and over again, in so many different directions and ways – a simple payday advance is part of that,” a- he declared. “It’s like we have to pay to be poor, even though we try not to be poor.”