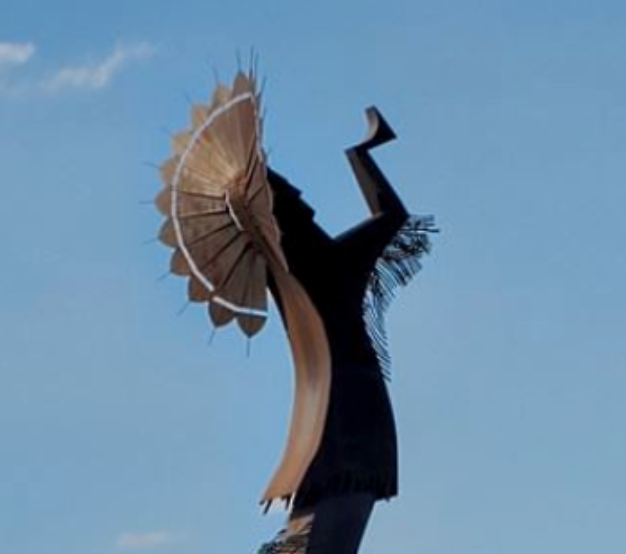 At the confluence of the Big and Little Arkansas Rivers in downtown Wichita stands a magnificent sculpture honoring the Native American history of Kansas. This iconic sculpture is known as Guardian of the Plains. It was created by a Wichita artist of Comanche and Kiowa descent, who had a distinguished career in the arts.

Blackbear Bosin is the artist who created this remarkable work. Most of the following information comes from the bookBlackbear Bosin: Guardian of the Indian Spiritby Bosin’s son-in-law, David Simmonds.

Blackbear Bosin was born in Oklahoma in 1921 to a Kiowa father and a Comanche mother. His native name, which belonged to his paternal grandfather (a Kiowa chief), means Blackbear in English.

Young Blackbear Bosin attended a missionary school in Oklahoma where he studied collecting Kiowa and European art and dabbled in painting. He went to the Chilocco Indian Agricultural School where he trained in sheet metal work, then moved to Wichita with his wife. During World War II, he enlisted in the Marines.

In 1943, he fell ill and was hospitalized at the Naval Hospital in Hawaii. There, he resumed painting. His art was so well regarded that the hospital hosted a solo exhibition of his works before his discharge in 1945.

Having regained his health, he returned to Wichita where he became an industrial designer and product illustrator for Boeing. He then worked in the training aids and arts department at McConnell Air Force Base. During this time, he builds his career as an artist.

From 1947 to 1950 his work was exhibited at the Dallas Museum of Fine Arts, the Detroit Institute of Arts, the Smithsonian Institution and more. In 1953, he made prairie firewhich would win first place in the Philbrook and be featured in the May 1955 National Geographic. This painting was said to bring him international recognition.

In 1959 Bosin opened the Great Plains Studio in Wichita. In 1960, he won the Grand Prix at the All-Indian Show in New York. The following year, he traveled to Switzerland to receive honors after being elected a member of the International Institution of Arts and Letters.

Bosin was the only Native American artist to participate in the White House Arts Festival in 1965. After winning the Philbrook’s Victory Trophy in 1967, he chose to stop participating in art competitions because he felt he was time for young artists to be recognized.

His creative work continues. He designed the logos for the Mid-America Indian Center in Wichita and the Wolf Creek Nuclear Generating Station, located near the rural community of Burlington, which has a population of 2,764. Now it’s rural.

In 1969, one of Bosin’s friends at the Kansas Gas & Electric Company asked him if he would design a large-scale statue honoring the native peoples of the Wichita area. Bosin agreed. It became the iconic structure known as the Keeper of the Plains, placed near the rivers in downtown Wichita.

A City of Wichita website describes it as a sculpture “with hands raised in supplication to the Great Spirit”. After a riverside restoration and beautification project, the five-ton, 44-foot-tall sculpture now stands high on a 30-foot rock promontory, surrounded by a plaza that depicts the Plains Indian way of life. .

Bosin was commissioned to create ten designs for the Franklin Mint for a series of sterling silver Native American history medals. The coins depicted various historical events with one side of the coin featuring the “traditional view” and the other side of the coin featuring the “Indian interpretation” of those events. In 1977, Kansas State presented Bosin with the Distinguished Service Award.

Blackbear Bosin died in 1980, but his magnificent sculpture still stands on what is considered hallowed ground in Wichita. We commend this Kansan for making a difference with creativity in art. Like the Guardian of the Plains statue itself, Blackbear Bosin’s impact is great.