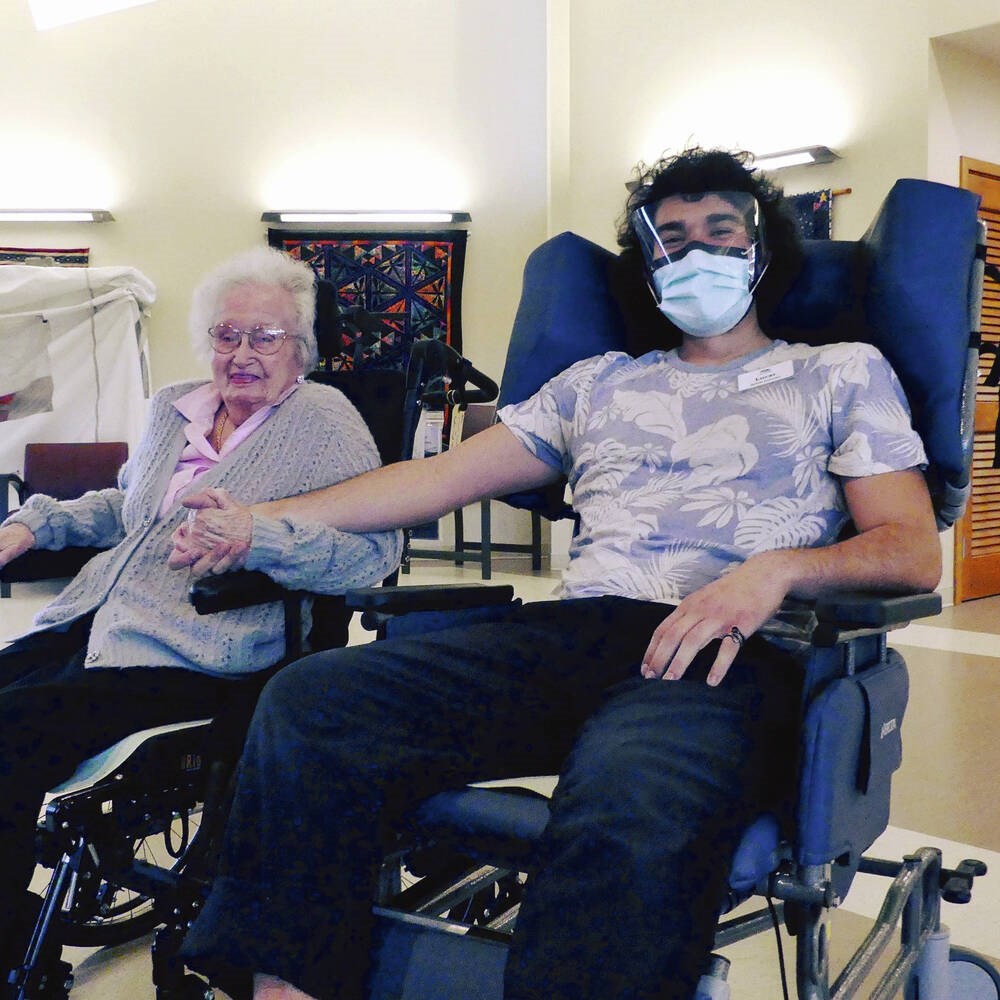 Lucas Gentina raises funds to purchase high-end wheelchairs designed to broaden the horizons of the residents he sees every day.

A hospital worker swims to buy wheelchairs for the elderly

Lucas Gentina is diving again in the cool waters of the region. He raises funds to buy high-end ­wheelchairs designed to broaden the horizons of the bedridden residents he sees every day.

This will be Gentina, 23,’s second fundraising venture this year.

In January, he swam across Elk Lake and raised $11,700 to buy specialty wheelchairs, which cost at least $4,000 each, for the Saanich Peninsula Hospital. Now he hopes to raise enough money to buy at least six more of these special wheelchairs, bringing the total to 12 at the hospital.

On May 15, Gentina aims to swim across Saanich Inlet from Mill Bay to Madrona Drive and Wain Road to Deep Cove. A boat from Frank Whites Dive Store will accompany him.

Gentina will put on her wetsuit and enter the water at 10 a.m. and hope to finish in 60-90 minutes.

He trained in a pool in the ocean with a friend nearby on a paddleboard.

Wheelchairs make a profound difference in the lives of bedridden patients, Gentina said.

Some patients are unable to sit in traditional wheelchairs and end up spending their days in bed. But the wheelchair that Gentina is raising funds to buy can be adapted to individual needs.

“It makes a huge difference when you have something comfortable to sit on,” he said. “The chair allows users to enjoy different aspects of our lives that you probably couldn’t if you weren’t sitting on something pleasant.

“When people still have their mental capacity but are unable to sit up unaided, there is more to their lives than lying in bed all day.”

“I want to get them out of bed and put them in situations where they can socialize and participate in the activities provided in long-term care,” he said.

“He loves to chat and nothing gives him more satisfaction than seeing the elders respond when he chats with them,” Buehler said. “He encourages them to share their life story and is constantly amazed at what some people have done over the years.”

A teenager who started a foundation to raise awareness about homelessness and a student whose recovery from mental illness was documented in film are the winners of Island Health’s 2022 Community Service Awards.

Marjike McDonald and Cameron Webster were presented with their awards by the South Island Mental Health and Addictions Advisory Committee on Tuesday during Mental Health Week.

In 2020, aged 16, McDonald started the charity Home Is Where The Heart Is, due to concerns about rising homelessness. “The feeling of not being able to help was really frustrating for me,” said McDonald, a student at St. Margaret’s School. “Victoria’s homeless community is a vital part of our community, and I really wanted to experience this side of Vancouver Island.”

A first project to collect donations for a dozen care packages has generated such an echo that more than 50 packages have been created. Today, McDonald and his colleagues at the foundation along with other high school students are planning an event where people, homeless or not, will be encouraged to share stories and make connections.

“What really stood out to me was that everyone just wants to be heard,” McDonald says. “That’s one of the most important things I’ve learned – we’ll be most successful when we finally start listening to each other.”

Webster showed courage and vulnerability in follow my brain, a 2019 film that documents her journey with mental illness and her recovery. In 2014, Webster was diagnosed with psychosis and later schizoaffective disorder. The latter presents symptoms of schizophrenia and mood disorders. “The main goal in making the movie was just to instill more hope, to tell a more auspicious story of recovery,” 26-year-old Webster said. “I wanted to kind of change that narrative if I could.”

He is about to complete his studies in mental health and addictions at Camosun College. An avid athlete, Webster is also a peer support worker for Island Health’s Psychosis Early Intervention Program.

“There are so many things you can do. With more time and effort, things get better,” Webster said.

“It takes time, but you know you can do it. The person who moves mountains begins by carrying small stones, right? »

Megan Davies, health historian and York University professor, took her traveling art exhibit, COVID in the House of Old, to her hometown, honoring the thousands of seniors who have died or endured months isolation as the pandemic spread to long-term care facilities across the country.

The exhibit opened on Monday and will be held at the Central Branch of the Greater Victoria Public Library in downtown Victoria throughout May.

Davies uses seven wooden chairs, sound and speakers to tell the stories of residents, surviving residents and workers in British Columbia and Ontario whose lives have been altered by the rapid spread of the disease. COVID in long-term care facilities. Each president represents the hundreds or thousands of Canadians who have faced similar circumstances. The exhibit is accompanied by an audiovisual composition created with global death statistics projected onto the wall of the library entrance.

Davies worked with sound engineer and composer Kohen Hammond to create the chair audios. Elegy was composed by musician and composer Hiroki Tanaka. Davies said she viewed the expo as an opportunity to honour, inform and spark conversation about the future of elder care, as highlighted by the devastating impact COVID-19 has had on people. vulnerable older people.

“Canadians may not yet realize – let alone reflect – how much we have failed our vulnerable seniors,” Davies said in a statement.

“But the massive deaths of elderly people in care facilities during the pandemic make the search for a radical new future for elderly care a major issue of our time. Our parents, our children and our future selves will judge us on the quality of our response.

The exhibit, located in the GVPL Central Branch Rotunda, is linked to a website by QR codes with alt texts and online transcriptions of the audio, allowing visitors to amplify the sound. The project is supported by a Jack and Doris Shadbolt Fellowship in the Humanities and by Simon Fraser University’s Department of Gerontology and York University’s Faculty of Liberal Arts and Professional Studies.

“The commitment of many organizations to support our community is truly remarkable,” said Sooke Mayor Maja Tait. The Council appreciates organizations that enhance “community inclusiveness, vibrancy and well-being,” Tait said.

The Choral Evolution Society, Take a Hike Foundation, and South Island Performing Arts Society each received $5,000, and the Steps to the Future Childcare Society received $5,500.

A concert on the peninsula helps Ukrainians

Aid for victims of the war in Ukraine comes from all over — including a private concert on the Saanich Peninsula.

An event at the home of Dr. Michael Quinlan and Teresa Quinlan raised $11,000 for Doctors Without Borders’ efforts to alleviate suffering. The concert featured the band Cowboy Celtic, including North Saanich residents David Wilkie and Denise Withnell, as well as three musicians from Alberta.

Fan Virginia Watson-Rouslin reports that Cowboy Celtic, which plays a mix of country and Celtic music, kicked off the show with a Ukrainian polka.

The band were getting back on track ahead of three appearances with the Edmonton Symphony Orchestra this month.

How it affects Indian teams