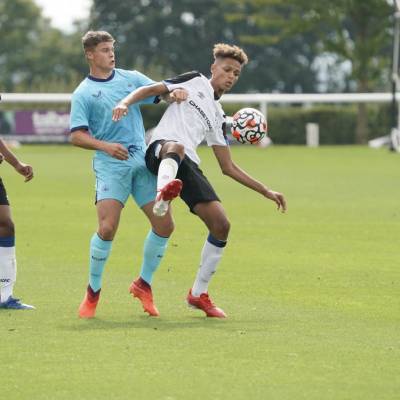 The Derby County Under-18s hope to build on their last 2-2 draw with Wolverhampton Wanderers as they face Stoke City on Saturday at Moor Farm Training Ground in the Under-18 Premier League – North ( kick off at 11 a.m.).

Adam Robinson’s side fought 2-0 to score a valuable point against Wolverhampton Wanderers in their final league game before the international break.

Daniel Cox’s tidy header and an own goal meant the Under-18s were content with a third straight draw.

This weekend, however, they are looking to do better and score three important points against Stoke.

The Under-18s currently sit 12th in the standings with nine points, while Stoke is one place and one point behind them in 13th.

The Potter’s most recent result was a 3-1 home loss to Burnley; a game in which the score was tight until the last minutes as Burnley scored two late goals.

With Stoke having won only once in their last seven league games and Derby winless in their last six, Saturday’s affair is one that both teams will desperately want to win.

In the last U18 games, Robinson has found pleasure in playing with a three-way defender, as it helps his team clutter up the midfield and win the ball high up the field.

Stoke’s Emre Tezgel has found the net seven times so far this season and will certainly be a player Robinson’s men will aim to cancel.

Derby’s top scorer Zion Dixon netted a brace in the 2-2 draw with Manchester United three weeks ago and he will be looking to increase his score after the international break in November.

Last season’s encounters between the two teams ended in a 1-0 win for Stoke at Moor Farm in November 2020 and a 3-2 away win for the Rams later in the season.

Robinson’s side will be hoping for the same result this Saturday as they set out in search of their first home win of the season.