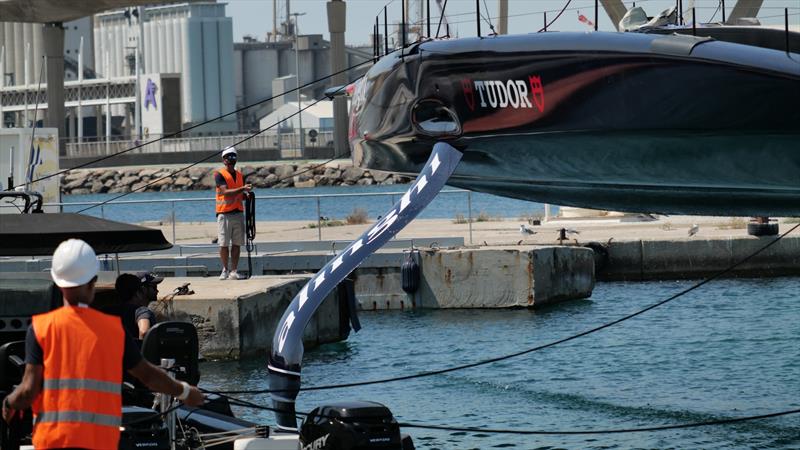 The New York Yacht Club American Magic has confirmed that it will set up a team base within superyacht facility Marina Barcelona (MB) 92 as the team ramps up sailing operations ahead of the 37th campaign of the America’s Cup in Barcelona in 2024.

Planning is already underway to build Barcelona’s squad base. It will be completed in May 2023, before NYYC American Magic moves from its current winter training base in Pensacola, Florida to the new base in Barcelona. It has not been revealed if the team will “winter” in Barcelona or return to Pensacola and then return mid-2024 with the AC75 race boat.

“The operational plan will require us to travel to Barcelona to meet from July 1 to October 31, 2023, sailing the site of the two AC 40s owned by NYYC American Magic,” said Terry Hutchinson, Skipper and President of Sailing Operations at NYYC American Magic.

“The facilities at Marina Barcelona 92 ​​will allow us to focus on our high performance sailing program and in-house training as we aim for the 37th America’s Cup. Once again, we are grateful for the support of Port de Barcelona and we look forward to training in such a beautiful and friendly city,” he added.

NYYC American Magic is the first team to confirm that it will be based in Barcelona during the period July to October 2023, when teams are prohibited from sailing from any location other than Barcelona between July 1, 2023 and October 31, 2023 The Barcelona-only period is closing in on the same window ahead of the 37th America’s Cup regatta, which is due to be contested 12 months later between August and October 2024.

It is unclear whether the teams will be sailing their first-generation AC75s in Barcelona or limiting their sailing to AC40s configured as test boats. As the rules currently stand, teams are not allowed to sail against each other in Barcelona outside of America’s Cup regattas and events, and at this time no additional races have been announced. .

The first team to move to Barcelona, ​​Alinghi Red Bull Racing, launched its AC75 on August 9.

This event was followed by towing trials over the next ten days – with a few days lost due to the accompanying bad weather and unsuitable sea conditions. The way the AC75 copes with the Mediterranean swell and the breakwater undertow will be followed with interest.

Last week the sailing team, at least, pulled out, and it is expected that an attempt will be made to complete towing trials and move on to sailing trials later this week.

For teams new to foiling, the process between launch, towing tests and test sailing is not fast and defies the best of PR calendars. However, given that the older Te Aihe survived a nose dive at 49 knots, the AC75 should be reasonably bulletproof.

Emirates Team New Zealand followed the same preparation process with Te Aihe, now Alinghi Red Bull Racing’s Boat Zero. But the Kiwis had the advantage of tossing and breaking two AC72 winged foiling catamarans, and likewise with their 2017 Cup-winning AC50 and its prototype.

The Kiwis were launched on September 6, 2019. They were back in Waitemata Harbor to set up and hoist the sails five days later on September 11, then began test sailing on September 12, 2019.

However, their new AC75 was plagued with mainsail hoisting issues. For the first few weeks, a crew member was often hoisted to the top of Te Aihe’s mast, apparently working on a halyard lock or similar problem.

Due to the complexity of the AC75 and the nature of progressive testing programs, it is unusual to see a team training for three consecutive days without at least one day in the hangar. One-week breaks are not exceptional either.

From what has been seen of Alinghi Red Bull Racing’s Boat Zero, much of the equipment and configuration is new, reflecting the experience of the designers and engineers who have joined the team from the teams of the 2021 America’s Cup.

Part of the fallout from the decision to host the 2024 America’s Cup in Barcelona instead of Auckland is that the America’s Cup defenders leave their glitzy Auckland Viaduct base or are charged what local authorities consider NZ$3-4 million fair rent.

A near-free arrangement for the team base was part of the 2021 America’s Cup host venue agreement. that the site generated $4.5 million in revenue in fiscal year 2017. However, that was before the opening of the new Sky City Conference Center, which is expected to compete with the soon-to-be-released Viaduct Events Centre.

It is understood the Cup champions are well underway with their move to their new home at the former INEOS Team UK (now INEOS Britannia) base on the rectified Wynyard Point. Before the 2021 America’s Cup, the area consisted of an ugly fuel and hazardous substances storage facility, which had been in operation since 1935. It was severely contaminated due to practices from that era.

The first clear sign of Emirates Team NZ’s move is the removal of its 2017 America’s Cup champion AC50 from the south wall of the team’s base. It is not known where the hydrofoil catamaran will be permanently installed.

INEOS Team UK/Britannia would have a ten-year lease on the Wynyard Point site, and the New Zealand team will launch at Wynyard Point Marina. The rest of the Wynyard Point area is now devoid of buildings except for the new ETNZ base. The flat area should be used for recreational and event purposes.

Emirates Team New Zealand, like NYYC American Magic and Luna Rossa (ITA), will operate a two-base strategy – with home and away bases.

The final list of base allocations was announced last week. Some sites are already cleared. Others will require some demolition before a new base can be built. Like others before it, the 2024 America’s Cup serves as a lever to rejuvenate an old port facility.

Luca Bontempelli, one of America’s Cup best-known sailing journalists, died last week in Milan, just two days after turning 61, following a fierce battle with a brain tumor which unfortunately turned out to be terminal.

Luca was highly respected for his competitive sailing experience in offshore racing, Olympic classes, the Whitbread Round the World Race and the America’s Cup, which he carried over into his thought-provoking writings on the America’s Cup. America and other sailing events and issues.

“We were lucky to have him at Fare Vela for a few years as general manager,” wrote. “Editorial meetings have always been a training ground. A continuous exploration of the most remote alleys of sailing.” Michele Tognozzi wrote in Fare Vela

“First a sailor and then a high-level journalist, Luca Bontempelli was followed by all Elban sailing enthusiasts and considered one of the most authoritative journalists of this sport at an international level.” says the ElbaPress

His death follows the sudden death of another longtime America’s Cup key figure, Francesco Longanesi Cattani (ITA), who died suddenly in mid-June in Milan after suffering a stroke. cerebral.