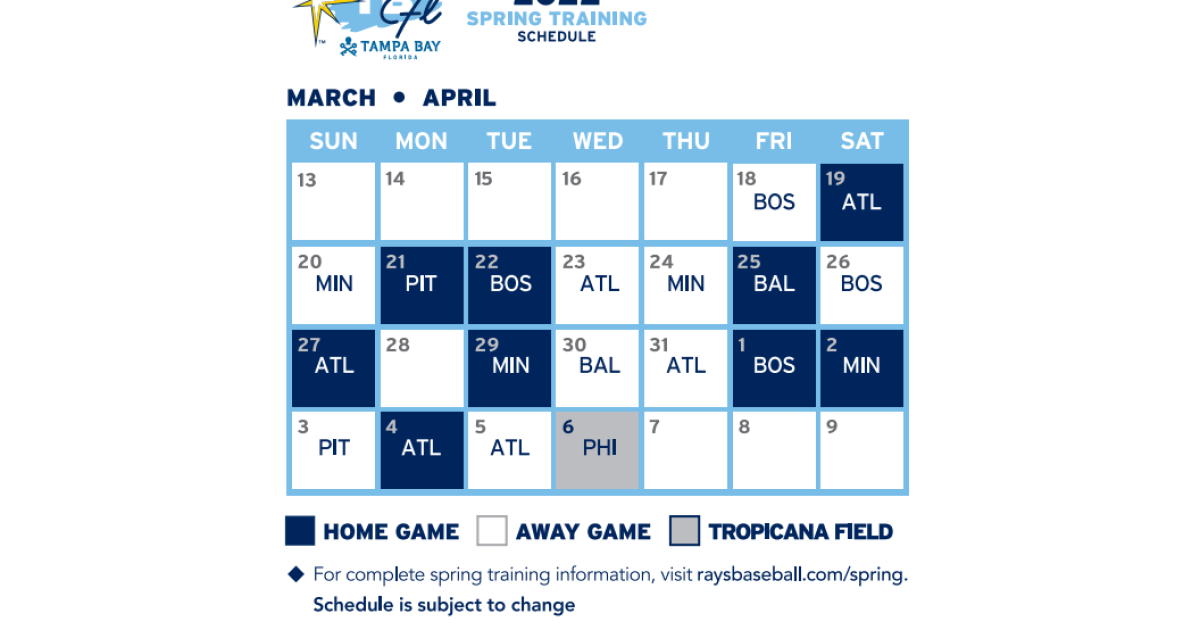 TAMPA BAY, Fla – The new schedule has been released! Check it out below.

The schedule features 18 official Grapefruit League games, including nine home games at Charlotte Sports Park and one home game at Tropicana Field. The spring schedule is subject to change and game times will be announced at a later date.

The Rays face five opponents in a regionalized schedule: the Atlanta Braves, the Baltimore Orioles, the Boston Red Sox, the Minnesota Twins and the Pittsburgh Pirates. The Rays open the Grapefruit League schedule on Friday, March 18 against the Red Sox in Fort Myers. The home schedule includes games over three weekends, including the home opener on Saturday, March 19 against the 2021 World Series champion Braves. The Rays round out their spring schedule with an exhibition game against the Phillies of Philadelphia on Wednesday, April 6 at Tropicana Field.

Single-game tickets and parking for all Rays Spring Training home games go on sale Tuesday, March 15 at 10 a.m. exclusively at RaysBaseball.com/Spring and through the Ballpark app. Season ticket holders and single-game purchasers of originally scheduled games will be notified via email of their options. Charlotte Sports Park is a mobile-only ballpark.

Paper tickets, including print-at-home and PDF versions, are not available or accepted. The Ballpark app is available for free download from the Apple App Store and Google Play. For more information on mobile ticketing, download the MLB Ballpark app or visit RaysBaseball.com/Mobile.

Pa. flips the switch on electrical apprenticeships | Five for the weekend