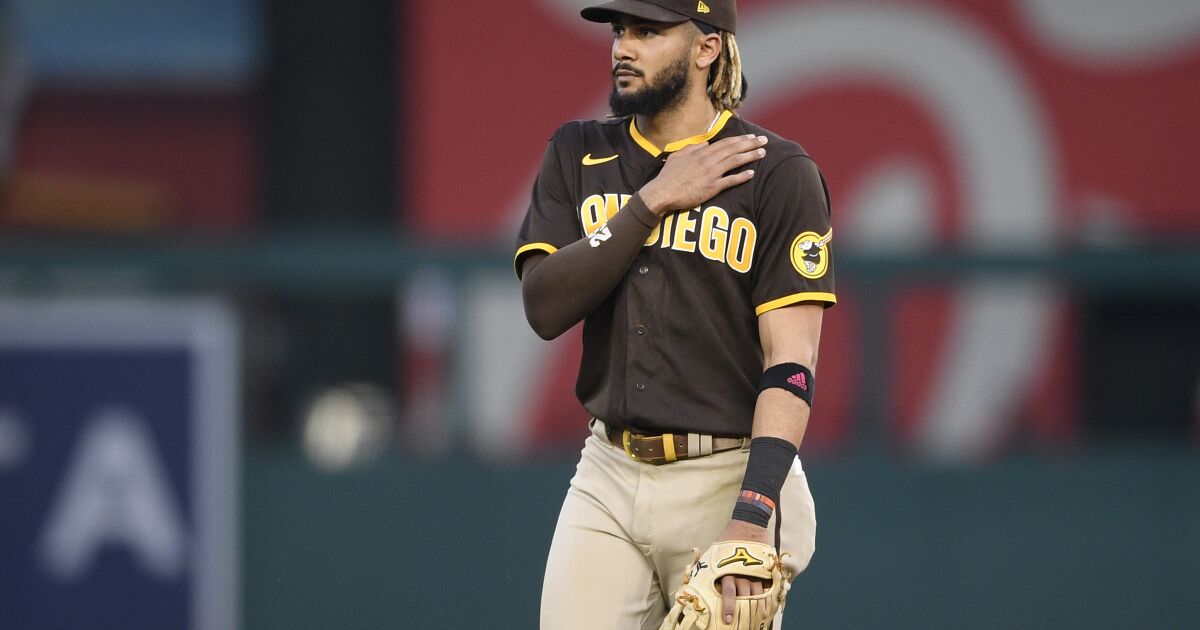 There isn’t much clarity as to where Fernando Tatis Jr. will play in 2023.

That’s enough for now, say the Padres, after the franchise’s former face missed the entire 2022 season.

It’s time to definitively determine if Tatis’ primary position will continue to be shortstop or if he’s moved to center field or somewhere else. He is currently months away from being able to play catch or swing a bat and will not be allowed to play in a meaningful game for nearly six months.

Tatis is expected to spend “a lot of time in San Diego” this offseason as he recovers from shoulder surgery in September and wrist surgery in October. Preller reiterated on Tuesday the expectation that Tatis “should be good to start baseball activity at the start of spring training.”

The Padres who play 12 postseason games will ostensibly get Tatis back early next season. He has served 60 games of the 80-game suspension imposed on August 12 for a failed PED test. That means he can make his season debut on April 20 in Arizona.

“I’ve had a dialogue with him here throughout the playoffs,” Padres manager Bob Melvin said, seated next to Preller at a season-ending press conference Tuesday at Petco Park. “And he’s just looking forward to helping his team and coming back. I think he’s got a different perspective on things now too. And the hunger he’s going to have to come in and be a part of this and help his squad to go further than we did last year is pretty huge, so what he’s focused on right now is getting healthy and coming back and being part of that group, because he missed it.

Tatis’ left wrist injury, resulting from an off-season motorcycle accident, was discovered shortly before spring training, and he underwent surgery to repair a fractured scaphoid in March. He was nursing that injury and was due to return in a few days when his suspension was announced.

With the time off, the team suggested again (more strongly) that Tatis should have the labral repair to his left shoulder which he declined after season 21. He agreed and this procedure was done the first week of September. The team also suggested a revision of wrist surgery, as imaging suggested it would become necessary at some point.

“It was really positive and I hope now…that he’s on time and the deadline is met and he’s able to come back for the start of spring training,” Preller said. .

Tatis is cleared for spring training, including games. He would then be out of the squad for the first 20 games. He is cleared to begin a minor league “re-education” mission on April 5.

“Anytime we can limit the time he’s away from the game and away from our major league team, I think that’s definitely a positive,” Preller said. “So having a few more weeks with a healthy Fernando Tatis should be positive for us.”

As his scheduled return approached last season, Tatis was scheduled to play shortstop and center field. He was used in those two places and on the right field at the end of the 2021 season, as the Padres tried to reduce the chances of him reinjuring his shoulder.

He’d probably be back at shortstop in 23 if not for Ha-Seong Kim’s excellence there in 22. Kim ranked third on the team with a 3.7 WAR and led the Padres with 10 defensive points saved. He is one of three finalists for a Gold Glove award.

There doesn’t seem to be a consensus within the organization, but some have suggested Tatis’ best fit is at shortstop. However, among the many variables are the departure of left fielder Jurickson Profar as a free agent and the Padres’ ability to sign a starting first baseman. Right fielder Juan Soto began his career playing three seasons at left, and Jake Cronenworth was a productive first baseman.

“It’s an issue, obviously, that gets talked about a lot,” Preller said. “I think right now it’s just about getting him back to good health. These are the conversations we’re going to start having here in the next few weeks – with our scouts, our front office group, the baseball operations department, Bob and staff – and try to get some clarification here before practice. of spring. He gives you that option because he’s a great athlete, he’s a great player that you can play all over the court. And we have other guys who have bolstered the current roster who will also be part of the equation. So it should be a good competition, and we will do what we think is best for him and for our club.