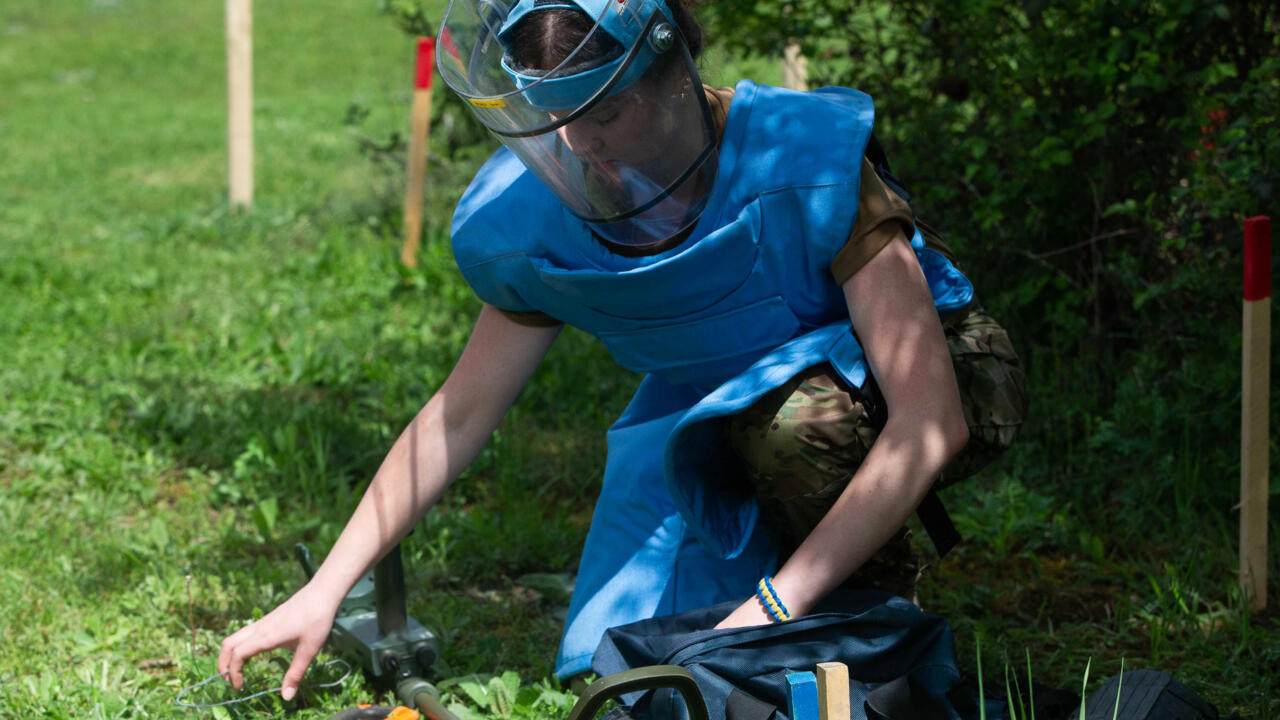 Peja (Kosovo) (AFP) – Kateryna Grybinichenko chose to enlist after rockets fell on her hometown of Sloviansk in Donetsk region in eastern Ukraine.

The 36-year-old wanted to help – so she joined a group of Ukrainian women who were taking a crash course in demining in Kosovo, a place all too familiar with clearing deadly explosives.

The trainees traveled hundreds of miles, hoping to protect their homeland for decades to come.

After learning their trade from the experts, the women plan to return to Ukraine and practice it in areas where Russian troops have withdrawn.

“There are different ways to fight,” said Anastasiia Minchukova, one of eight women who applied for the program.

The 20-year-old English teacher, who dons a blue protective apron and visor for training, said there was “huge demand for people who know (demining)” in Ukraine.

“The only reason I’m here is to help my country,” she said.

Trainees learn to detect, identify and neutralize explosives in the course organized by the Kosovo NGO Mines Awareness Trust (MAT).

Six women started the three-week program in the western town of Peja, known as Pec to Serbs, on Monday, with two more expected to arrive soon. The organizers plan to welcome more trainees in the future.

The course was specifically set up in response to the invasion of Ukraine and focuses on Russian and ex-Soviet weapons, including guided weapons, mines and rockets.

It is also open to men, but Ukrainian men between the ages of 18 and 60 are prohibited from leaving the country. And the women here want to participate in the defense of Ukraine.

MAT said the course is the first of its kind outside Ukraine since the Russian invasion began in February.

Kosovo was chosen to host the program because of its “first-hand experience”, said chief instructor Artur Tigani.

“We experienced a fairly similar situation, especially with regard to contamination from unexploded ordnance.”

An estimated 13,000 people lost their lives in the war between Serbian forces and ethnic Albanian guerrillas in the late 1990s.

The conflict ended after a NATO air campaign forced Serbian troops out of the territory, paving the way for independence in 2008.

But the war left the former Serbian province with 4,500 minefields, according to US post-war estimates.

The devices were scattered mainly in the mountainous region of Peja, near the Albanian border, where Tirana was shipping weapons and supplies to Albanian guerrillas.

With international assistance, most mines have been cleared, and the risk is now officially assessed as “slight”.

“It is our life’s mission to save lives and to help others save lives,” Tigani said.

Ukrainian interns are aware of the huge challenge they face when they return home.

They expect to join emergency services and get to work when they return on May 13.

“I saw, during a trip to (Ukraine), the huge amount of abandoned munitions and unexploded ordnance lying on the ground,” Grybinichenko said.

It is believed that it could take decades to rid Ukraine of mines. Perrine Benoist, of the NGO Handicap International, said it would probably take “50 years to clean everything up”.

Minchukova knows that she and her fellow trainees have undertaken a perilous task.

But she said, “It’s dangerous anywhere in Ukraine, even if you’re in a relatively safe area.”

“I’m ready for it. I’m a Ukrainian. I’m not afraid of anything.

“I know we will have a chance to prove (that we are) worthy of doing the same as the men.”